The City of Pflugerville celebrates recognition from the Texas Downtown Association’s 2019 President’s Awards as a finalist in the “Best Public Improvement” Category for its downtown plaza located next to City Hall at 100 E. Main Street. 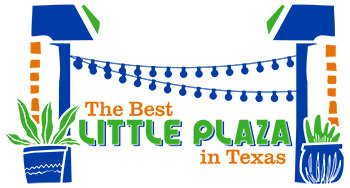 Given the Texas Downtown Association recognition, City Manager Sereniah Breland took the opportunity to announce the official name of the plaza, “This public space is one of the best public improvements in the state which is why we have confidence in officially naming our downtown plaza, ‘The Best Little Plaza in Texas.’”

While only 6,000 square feet, this little plaza has transformed the downtown space into a tiny gathering place. In April the City hosted Plazapalooza to build the plaza. In an effort to beautify Downtown Pflugerville and develop a space for the community to gather, City staff, civic groups and community volunteers partnered to transform the area into an eye-catching plaza that is welcoming to all.

The space was constructed in two days utilizing grant funding and sweat equity from City teams and volunteers. Today, it is used for a variety of community gathering purposes—the City held the annual Park(ing) Day at the plaza, a National Night Out Party and various events, such as music performances, are scheduled for the future. Residents and visitors alike use the space to relax, chat with friends and play games. The plaza includes a small garden, musical flowers, and even is home to several tiny gnomes that you may spot amongst the foliage. Since the plaza’s construction, it has already fulfilled its purpose as a place for the community to come together and enjoy the downtown area. The Plaza benefits downtown businesses who have seen an increase in pedestrian activity and visitors.

The Best Little Plaza in Texas is accessible to all, and residents are encouraged to visit and build relationships within their community. The City plans to continue to host events at the little plaza in order to encourage community gatherings and engagement.

To find out more about the plaza, visit www.thebestlittleplazainTexas.com.