Show/Hide
COVID-19 Updates: Please visit our Covid-19 page for the latest news updates regarding the Stay Home Order in effect

On April 15, the Texas Senate approved a version of SB2 known as the Texas Property Tax Reform and Relief Act of 2019. The bill makes many changes to the process of adopting property tax rates including: renaming the rollback tax rate the “voter-approved” tax rate, setting a revenue cap of 3.5%, mandating an election for all cities that want to exceed the voter-approved rate. The bill has yet to be voted upon in the House, however that vote is anticipated next week. Pflugerville City Council has passed a Resolution against SB and HB 2 due to its limiting of the City to make necessary decisions within the budgeting process. The City Council also agreed that it did very little to reduce property taxes. Click here for more information on the bill.

On Tuesday, February 26, 2019, Pflugerville City Council unanimously passed a Resolution in opposition to Senate Bill 2/ House Bill 2 in its current form, a bill imposing a revenue cap and legislative interference with local services greatly limiting the ability of the City of Pflugerville to manage the City’s portion of the property tax rate.

“The City Council agrees with the concept of managing a jurisdiction in a way that provides the best services to citizens at the lowest possible cost,” Mayor Victor Gonzales said. “From 2000 to the present the City has reduced the property tax rate by 30%. However, a 2.5% cap on City property taxes could have a negative impact on our City’s services that will affect how we provide City services including police, roads and quality of life.”

The City Council proposed the following amendments to the bill to reduce property tax burdens in a way that does not negatively impact the City’s ability to provide needed services.

Add an exemption from the mandated 2.5% rollback for public safety expenses.

In most cities, the cost of public safety can range from 40 to over 50% of the general fund operating budget.  The cost of new public safety personnel and equipment for FY 2019 would have exceeded the loss of revenue for the City’s jurisdiction. In Pflugerville, 80% of the property tax revenue could be attributed to public safety functions.

Index the rollback rate to increase with a verifiable municipal cost index (MCI).

The previous 8.0% was in response to the inflation that was occurring at the time. Since the future cannot be predicted, an MCI index would provide automatic increases as prices increase.

Work with the taxing entities to determine a more workable timeline for the tax setting process. 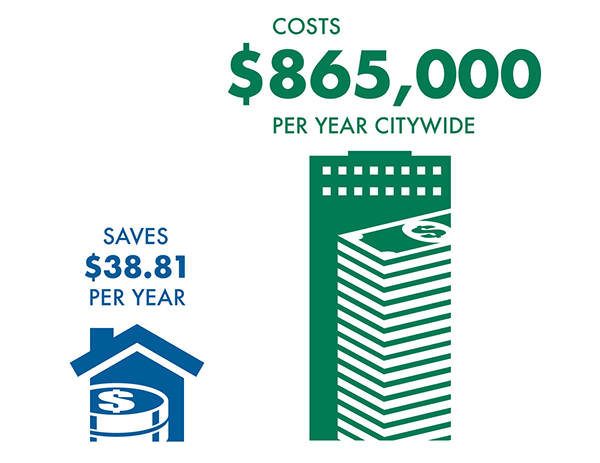 The current timeline compresses the City’s time to effectively analyze the budget and respond to citizen input.

Based on Pflugerville’s average home cost of $241,000 and tax rate, under SB2 the average homeowner would save $38.81 a year which negatively impacts the City’s annual budget by $865,000.

“The savings to the local homeowner in the proposed bill is rather minuscule, but the negative impact to the city budget is a reduction of $865,000 annually,” Mayor Victor Gonzales said. “We are working to recommend to our legislators that adding an exemption for public safety expenses is essential and to put together a more workable timeline for the tax-setting process.”

To put the $865,000 in perspective, it exceeds the current City’s budget for adding new police officers in 2019.

City representatives are attending Legislative hearings related to SB/HB 2 with recommendations to manage the impact of the proposed bill while still generating the desired outcome of property tax management.

While strongly opposed to SB2 in its current form, the Council emphasized the opportunity to continue to assist in this process by offering suggestions from the local perspective that will preserve Pflugerville’s ability to provide the level of services expected by Pflugerville residents.

Does Pflugerville have a significant need for property tax relief? 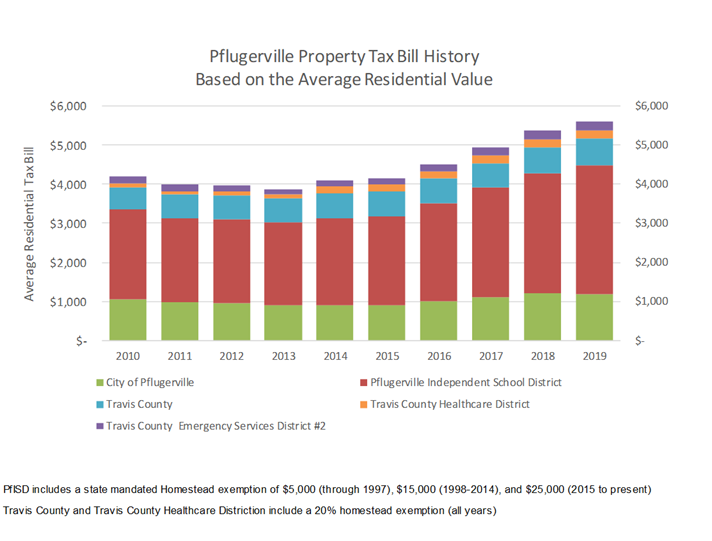