The City of Pflugerville was notified by the Department of Housing and Urban Development on July 29, 2013, that it would be eligible to receive Community Development Block Grant Funds in the approximate amount of $230,000 for Program Year 2014. A small portion may be allocated toward planning and/or administrative expenses, but the intent is to maximize the funds available for capital projects benefiting low and moderate income households within the City of Pflugerville.

On September 10, 2013, the Pflugerville City Council passed a resolution indicating the city's intent to participate in the program. 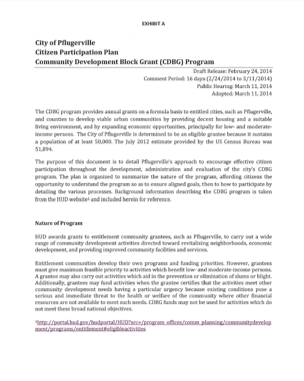 The primary goal of the Citizens Participation Plan is to provide citizens an opportunity to participate in an advisory role in the planning, implementing, and assessment of the programs and projects.  Interested citizens were asked to submit their comments by March 11, 2-14 or to attend and participate in the City Council public hearing that was held on March 11, 2014.