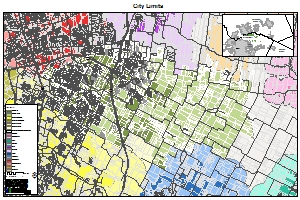 The ETJ is a designated buffer area located just outside of the city limits. Each municipality is afforded an ETJ by the Texas Local Government Code as a method of defining potential growth and future service boundaries. An ETJ boundary cannot overlap with another municipality’s ETJ, and property owners can not elect which boundary they want to be part of, unless mutually agreed upon by the municipalities.

What is the Extent of an ETJ?

What is regulated in the City of Pflugerville ETJ?

What is NOT regulated in the City of Pflugerville ETJ?

What services are provided in the ETJ?

How is an Agricultural Development Agreement regulated in the ETJ?

As afforded to municipalities through legislation within the Texas Local Government Code, municipalities can make a non-annexation agreement with land owner’s in the ETJ to continue the current agricultural, wildlife management or timber cultivation use, with an allowance for the City to impose municipal regulations on the property, provided they do not interfere with the agricultural uses. The agreement also allows the City to annex the property if the landowner decides to change the use to something other than agriculture or decides to subdivide the property.